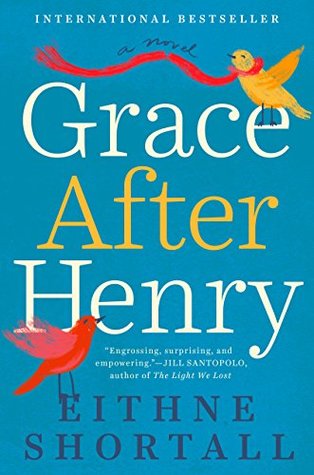 As a contemporary with a mix of romance and grief, this book was definitely not what I usually read, so I’m glad to say that I enjoyed it! It was such a great palette cleanser from all the fantasy I’ve been reading of late. (Also, I really wish I was in Ireland now, where the book takes place.) I’m definitely going to have to keep an eye out for books with similar vibes now.

Grace After Henry follows Grace shortly after the death of her partner, Henry, who died in a freak bike accident. Just as she begins to return to work and to fix up the house that she and Henry bought right before his death, Andy, Henry’s long-lost identical twin brother shows up on her doorstep. In an intriguing mix of continuing to mourn, falling in love again, and an unexpected surprise, Grace must decide what she wants her life to look like going forward.

I don’t know how Eithne Shortall did it, but this book had such a great balance between grief and lightheartedness. Grace’s quirkiness is hilarious, and so are many of the side characters. And witnessing Henry through Grace’s flashbacks made me mourn him too! Like, I can’t believe Shortall made me fall in love with a character who was already dead!

This book is definitely character-driven, which makes sense since Grace is swaddled in various degrees of grief throughout most of the book (though I still wish there had been a little bit more plot). Shortall is brilliant at writing characters. Every character is distinct and has their own unique personality, even the side characters! Just a fair warning though, the bizarre circumstances of the book and Grace’s tendency to be secretive tend to make the novel come across as a bit soap opera-y at times.

Additionally, the ending feels like it is cut a bit short. I wanted more! The epilogue is not enough! I would so read a second book about Grace and her future. I was really satisfied with the ending though (Grace had me worried right up until the end).

The reason I didn’t rate Grace After Henry higher was because I found myself wanting more from the book. I’m not sure I can properly describe it, but I wanted to see the themes of the books pushed more or something. I wanted to see the author do more with the characters and the story, though I’m not sure how though…I don’t know, maybe I’m just being picky.

Overall, I really enjoyed this book! It was a great reminder that I need to turn towards contemporary books more often. I would recommend this book to any lover of contemporaries and romances who is looking for some depth to the stories they read. I will definitely be keeping an eye out for other releases from Eithne Shortall.

Trigger Warnings: Grief. Unexpected death. Loss of a loved one.

“Not quite, but I could easily ride into any contemporary reader’s heart.”